The ongoing impact of COVID-19

The COVID-19 pandemic has seen the fastest, and most far-reaching response to a global health emergency in human history. 2021 will see the outworking of this collective scientific effort, as nations embark on the mammoth task of vaccinating millions of people. Despite the calamitous impact of COVID-19 and these dramatic medical advances, there remain many sceptics, including within the Church, who persist in questioning the virus’ existence and need for the vaccine. One of the overarching ‘fruits’ of COVID-related conspiracy theories, fake news, and hoaxes, however, has been rampant fear. It is within this atmosphere of fear and uncertainty that the Church and its members will continue in 2021 to have numerous opportunities to impact their social circles with the Gospel of truth and hope. Societal ‘lockdowns’ around the world have forced the Church online, and even though online church services were nothing new, it grew in coverage and effectiveness as most worshipping communities were forced to go digital, and explore new avenues to remain connected, and “make disciples”. As people of all faiths became isolated and fear increased, the power of ‘online church’ opened many new doors for the Gospel to reach the world. COVID-19 travel restrictions also placed pressure on reaching ‘unreached’ peoples as foreign missionaries returned to their home countries en masse, many of whom are yet to return. This left the ‘indigenous’ Church to continue the work, and it did so, with great success. Vaccines promise, in time, a return to ‘normal’ where worshippers can again gather in church buildings, and missionaries can again travel to far-off places, however, it should be the lessons learned before the vaccine that should write the new history of the Church for the generation to come. The COVID pandemic, as bad as it has been, has had some positive impacts on the Church. It has demonstrated that parts of the world can be reached through a computer and that the ‘indigenous’ Church can stand on its own ‘feet’ and needs less input from the West than was previously thought.

On 20 January, Joe Biden became the 46th President of the United States of America and the oldest person ever elected to that office. Fifty years after entering politics, he is at once the most widely travelled, and best known to his fellow world leaders, incumbent in the history of the presidency. No US president – since George H.W. Bush – has entered office with as extensive knowledge of world leaders, or as much comfort engaging with them, as Mr Biden does. He is widely considered to be an expert in diplomacy and a top negotiator. He has publicly committed to “healing and uniting” the US after a highly contentious presidential election, pledging to work as hard for those who did not vote for him as (for) those who did. It is anticipated that Biden’s administration will focus on the COVID pandemic, including two proposed stimulus packages, as well as reversing certain actions taken by the Trump administration over the past four years. Areas, where changes are anticipated, include immigration (including the travel ban, asylum policies and quotas), climate policies, and a re-engagement in some international agreements.

Elections are not always democratic, and elected leaders often do not deliver on their promises. Thus, especially during times of uncertainty, people look to new leaders, convinced that the old have failed them. In 2021, there are five national elections to watch that could impact the Church or mission efforts.

Due to the COVID-19 pandemic, the 2020 Summer Olympic Games were rescheduled to 23 July through 8 August 2021. The Games will, however, retain the name Tokyo 2020 for marketing and branding purposes. Apart from being a major source of income for the host country, the Olympic Games (both summer and winter) have traditionally been a destination for many missionary groups seeking to share the ‘Good News’ of the Gospel, not only with spectators from around the world (500,000 foreigners travelled to Brazil during the 2016 Games) but also the host nation’s citizens. The Olympic Games have, over the years, been a tool in God’s hands to ‘win souls’ for His Kingdom. The 2008 Olympics in Beijing saw China open up to the rest of the world. The 2018 Winter Olympics in South Korea saw athletes from North and South Korea presented as one team and opened the way for renewed talks between the two countries that are technically still at war.

Treaty on the Prohibition of Nuclear Weapons (TPNW)

On 22 January, a new international treaty, the Treaty on the Prohibition of Nuclear Weapons, will come into effect, aimed at the total elimination of nuclear weapons. In 2017, UN member states voted in a resolution committing parties not to develop, test, produce, acquire, possess, stockpile, use, or threaten to use nuclear weapons. The treaty became international law once at least 50 of the member states ratified it – Honduras became the 50th state to do so on 24 October 2020. The treaty thus becomes legally binding within 90 days of this milestone. This is seen as a historic moment for the eradication of nuclear weapons, paving the way for a world where it will soon be unlawful to possess, develop, or deploy a nuclear weapon. The major detractor for the TPNW is that not one nuclear-armed country signed the treaty, and because all the permanent members of the UN Security Council are nuclear-armed it seems unlikely that nuclear weapons will cease to exist anytime soon. Nuclear-armed countries argue that their nuclear weapons remain a strong deterrent against attack – known as ‘mutually assured destruction’ (MAD) – and therefore cannot afford to do away with them. They further claim that nuclear weapons maintain global security and keep overall peace. Today, nine countries possess an estimated 13,355 nuclear weapons, with Russia and the US owning 92 per cent thereof. Christians have campaigned for years against the use of nuclear weapons, and it is hoped that the new treaty will serve as a reminder to world leaders that there are other ways of ensuring peace, other than nuclear deterrence.

1 July will mark the 100th anniversary of the founding of the Chinese Communist Party (CCP), currently led by President Xi Jinping. According to Mr Xi, China’s goal for its centenary celebrations is to have “built a moderately prosperous society in all respects”, and with its impoverished rural population being lifted out of poverty and development targets being reached, it seems as if China might just have done what it set out to do. But how has China’s more prosperous society impacted Chinese Christians? As the urban population continues to grow, China has turned into a surveillance state that has made it increasingly difficult for the Church to operate. The Chinese government has in recent years renewed its efforts to clamp down on unregistered house churches and has even forced registered state-sponsored churches to remove its Christian symbols (China has moved back into the Top 20 of Open Doors’ Watch List of countries where it is particularly dangerous to follow Christ, the first time in a decade). Yet despite the persecution, the Church has seen tremendous growth over the past years. Its ‘power’ is now vested in its ‘sending’ ability, and the vehicle being used is China’s international growth through its One Belt One Road (OBOR)initiative that enables the Church to send workers into more than 65 countries. The CCP is therefore instrumental in the growth of the Church and the doors it has opened for Chinese missionaries to reach the world.

10th anniversary of the war in Syria

2021 marks 10 years since the start of the war in Syria, that has, according to the United Nations statistics, claimed the lives of about 400,000 people and displaced more than 12 million people. The ongoing conflict in Syria is widely described as a series of overlapping proxy wars between regional and world powers, primarily between the US and Russia as well as between Iran and Saudi Arabia. Syriac Christians are among the oldest communities of believers in the world, tracing their presence back to the founding of Christianity.  Some Syrian churches preserved the ancient biblical languages of Syriac and Aramaic and stand as a reminder of God’s enduring faithfulness and His promise to never leave or forsake His Church (Matt. 28:20). The war has caused many Christians to flee the country – numerous traditionally Christian towns suffered at the hands of opposition (rebel) groups. Despite the negative impact on the Christian witness in Syria, those who remained testify of growth as they continued to share the Gospel. In countries of refuge like Lebanon, Jordan, and Germany, thousands of Syrian Muslims have come to know Christ as a result of activities of compassion from local Christians and missionaries. This growth in the Church among migrants has also served as a catalyst for Christian revival in countries like Germany (that accepted more than one million Syria refugees). Although the war continues, there are definite signs that it could be drawing to a close. Syrian believers, both inside the country, and out, will be instrumental in the rebuilding of the country.

2021 marks the 20th year since the 11 September terrorist attacks on the United States. It also marks the 10th anniversary of the killing of Osama Bin Laden, the mastermind behind the attacks. These two anniversaries highlight a major shift in Western thinking in terms of Islamic terrorism and Islamic society in general. Before 2001 the Muslim world was far removed from the ‘Christian West,’ which was just emerging from more than four decades of a ‘cold war’ with the Soviet Union. Seemingly overnight world news became dominated by Islamic terrorism. Two months after the ‘9-11’ attacks, the US launched its ‘War on Terror’ by sending 1,300 troops to Afghanistan. Over the next nine years, the US troops numbers increased to over 100,000 as it fought against the Taliban and Al-Qaeda to root out terrorism and “bring democracy” to Afghanistan. As part of the ‘war on terror,’ the US also deployed more than 125,000 troops to Iraq, where they overthrew Saddam Hussein. US troop withdrawal from Afghanistan began shortly after a US Special Forces operation killed Osama Bin Laden in 2011, with fewer than 5,000 remaining. Christians have always faced persecution in Afghanistan, but while US troops fought alongside the Afghan government against Islamic terror groups, the Church benefitted. The Church was largely overlooked by the government as their focus was elsewhere. US troop withdrawals coincide with peace agreements between the Afghan government and the Taliban, which have raised concern for the Church of increased persecution.

2021 could be a crucial turning point in US-Iran relations. The Trump administration placed enormous pressure on Iran in recent years. In 2018, Mr Trump withdrew the US from the Iran nuclear deal (agreed by his predecessor Barack Obama, and his then Vice-President Joe Biden), reimposing many of the heavy economic sanctions that the United States had agreed to lift in 2015 in exchange for limits on Iran’s nuclear activities. The two nations also came dangerously close to military confrontations over the last two years. Amid these tensions, the Church in Iran has grown, despite ongoing persecution from the government. Continued US troop withdrawals in Iraq in 2021 could see Iran increase their influence in the region, while incoming US President Joe Biden has indicated a desire to negotiate with Iran to restore the nuclear deal, a significant change in US strategy. How potential shifts in US-Iranian relationships will impact the Church in Iran will only become more apparent in time.

“Do not be anxious about anything, but in everything by prayer and supplication with thanksgiving let your requests be made known to God.” (Philippians 4:6)

Please pray with us: 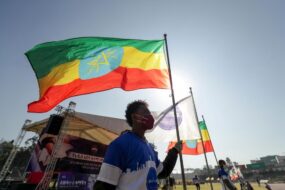 WILL TIGRAY BE ETHIOPIA’S TIPPING POINT? 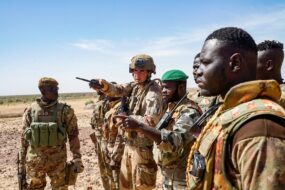